“I am Detroit,” says J.R. Mills, as he gazes at the Detroit River and looks for answers that do not come. If you had met J.R. 10 years ago, you would think – you would know – that this is exactly the kind of man that will be part of Detroit’s turnaround. J.R. was a rising star: college educated, quick-minded, an infectious smile and a passion to serve his community. He was strong and ambitious, with a loving family and a good job. With a natural gift for gab, J.R. could inspire others and it didn’t take long for people to take notice, from employers to city leaders. J.R. was going places, on the fast track, or so it seemed. But that was before it all crashed, and now he spends his days mostly alone, homeless, injured and frightened, staring at the River and trying to collect his thoughts. 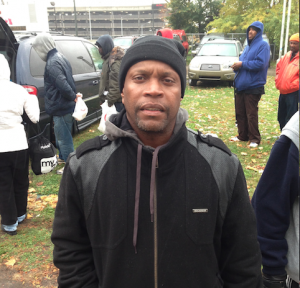 There was a time when life came easy for J.R. He loved to study and learn new and challenging things. He started college at Wayne State before transferring to the University of Michigan, his dream school. He loved engineering, especially electronic graphic engineering, and landed a job at Delphi and collected numerous advanced vocational certificates.

He was all about helping Detroit, especially people who were down on their luck. He got involved in the Detroit Action Commonwealth, an organization that, ironically, fights poverty, homelessness and injustice. He rose through the ranks and became one of its leaders. Soon he caught the eye of a local councilman, and became a media spokesman. He appeared on tv, including a WDIV commercial for the Detroit Rescue Mission. He believed in the city’s rebirth and thought that he, with all his skills and eastside pride, could play a vital role.

J.R.’s crash was sudden. Several years ago, while waiting for his friends to celebrate his birthday, a scuffle erupted and he got shot in the arm. The wound never quite healed and he had no health insurance. He lost his job, couldn’t find other employment, his benefits ran out and had no long-term place to go. Another casualty in Detroit. Just like that.

Today, J.R.’s life is no longer about the promise of tomorrow; it’s about the daily struggle for survival. “The benches are too scary to sleep on,” he says, “and so I usually go from casino to casino until 6:00 am when I can go to St. Peters for a shower.” He gets many of his meals and clothes from Heart 2 Hart, a local non-profit that aids the homeless.

He wants people to know that there are homeless people like him, people who once were educated, determined, going places. We walk by many of these people and may dismiss them as untidy, unambitious, maybe a drug addict or an ex-con. But among the almost 20,000 homeless Detroiters are many people that don’t fit that mold, people who are literally left out in the cold. “I don’t just speak for myself,” he emphasizes, “I am Detroit.”

J.R. stares at the Detroit River every night and prays. Gazing at the cold water, alone, a long way from the University of Michigan and the bright future he was certain was just around the corner, he asks the Lord for guidance and safety.

And he throws in the one wish that he believes can turn his luck around: “I just want a job.”