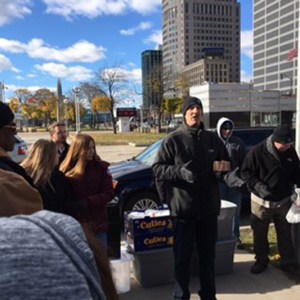 When a heavy snowfall suddenly appeared at the University of Michigan football game last Saturday, the crowd began to cheer as cheerleaders formed snow angels on the sidelines and fans tossed snowballs in the stands. Winter fun, if only momentarily, had arrived.

About 40 miles southeast of Ann Arbor, in Detroit, that same snowfall signaled something ominous to the roughly 20,000 homeless people in the city: the dreaded, long and cruel winter months were returning, and with it the undeniable reality that their harsh existence was about to get tougher.

Homelessness continues to plague Detroit where about 25 percent of the homeless are children and 20 percent suffer from mental illness. Shelters and warming centers face budget tightening, and reports of harassment and violence against the homeless are increasing at an alarming rate. 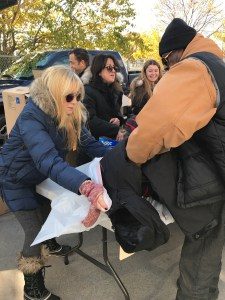 Jodie Gross of Franklin assists in distributing a new winter coat, one of 100 coats distributed.

Each year during the holidays the group hosts a similar event to help people prepare for winter with this year’s event funded, in large part, by the efforts of two incredible 15 year old girls, Bree Gross and Emma Sable, who solicited support from their classmates at Cranbrook Kingswood School.

With Thanksgiving only days away, many of the homeless folks were reflective on the holiday and what it personally meant for them during this difficult time in their lives. But if the volunteers at Hart Plaza were expecting to hear sadness and despair, they were clearly mistaken. Despite facing daily struggles that are unimaginable to the suburbanite volunteers, the homeless folks were surprisingly upbeat, a sentiment that was as shocking as it was inspirational.

There was Coleman, 71, a Vietnam veteran with a warm smile, telling us that he was confident that next Thanksgiving is going to be different and he “can’t wait.”

Or Martha, also 71, who had been living in the streets for the past two years after she left an abusive relationship, had lost two sons to AIDS and now has a third son in prison, but who nevertheless assured us that she’ll be OK since “the Lord gives me strength.” 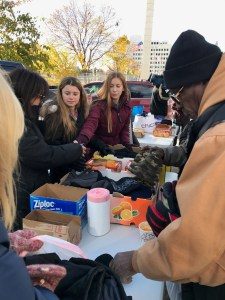 Bree Gross of Franklin and Emma Sable of Bloomfield Hills distribute socks, gloves and hand warmers to the homeless at Hart Plaza

A 49-year-old man known on the streets as “Knowledge” has a reputation as a poet and a philosopher. Knowledge told anyone who would listen that “Jesus was homeless, too” and that as he looks to Thanksgiving he is “very hopeful” since “things always work out for me.”

Many folks expressed thanks for simply being alive, especially since they all felt an increase in the harassment or violence to homeless people in the past year. Brian, age 54, tells of the time that a group of young adults “threw an M80 at me while I was sleeping” and then took off laughing.

He’s known other homeless people who have been spit on or hit by cars, and recently he lost a friend who had been sleeping in an abandoned building that had been lit on fire. But Brian was not bitter or angry. When I asked what he wishes for, his answer was quick and simple: “I just want some shoes.”

Lee, age 66, is one of the lucky ones. Lee is a college graduate and just recently, with Heart 2 Hart’s help, landed a job as a teacher, which enabled him to get an apartment. He says he is “most grateful” for the ability to “bathe daily.” Lee is quick to express his patriotism, and says that “all Americans should be thankful for the bounty we have.”

That patriotism was especially on the mind of Manny, age 70, an ex-Marine who says he is “proud to have served my country.” Manny served in Vietnam, just as his father served in WWII and his grandfather in WWI. He says he marched with Dr. Martin Luther King in Montgomery, which taught him not to hate, a trait that he says serves him well in dealing with homelessness. Manny’s positive inner spirit is contrasted by his scarred face and ragged white beard, which reveals the harshness of his years. Manny grew up in Alabama, and at age 70, when he thinks about the future, his greatest wish is to go back home one day and go fishing.

As the event was ending, the volunteers were packing up, going back to their warm and safe houses in the suburbs, while the homeless folks were scattering throughout Downtown, with new winter coats, a large bag of new supplies and a cup of soup in their hands. Two of them, both deaf, were walking together and smiling at each other.

The scene was, to me, poignant and profoundly sad. But as I stood there, numbed by the thought of what lay ahead for all of these folks, Coleman, the 71-year-old optimist, turned to me, smiled and said, “Remember, we ain’t nobody’s victim.”

Sometimes inspiration comes from the most unexpected places and the most unlikeliest of people.

By Mark Jacobs, Special to the Jewish News