Akebono held its fourth annual Chili Cook-Off for Charity at its engineering center in Farmington Hills, Mich. recently, where associates tasted over 20 varieties of chili and voted for their favorites via a monetary donation. The chili that received the most money for charity was declared the winner, with all proceeds donated to Heart 2 Hart Detroit.

“The donation from Akebono will provide roughly 500 meals and 250 new clothing items for the homeless men and women of Detroit,” said Larry Oleinick, president of Heart 2 Hart Detroit, who attended the event. “We are grateful for Akebono’s generosity that will directly impact the lives of so many who need a helping hand.”

Heart 2 Hart Detroit was founded in 2012 and is based in Farmington Hills, Mich. Every Monday, Wednesday and Friday, volunteers go out into the streets of Detroit to distribute life-sustaining items to hundreds of homeless Detroiters. They also work to connect people to community service organizations, rehabilitation facilities and potential employers and reconnect family members. For more information about Heart 2 Hart Detroit, visit www.h2hd.org.

About Akebono Brake Corporation
Akebono Brake Corporation is a leader in advanced brake and friction material development and production, with a focus on noise, vibration and harshness (NVH) analysis and control. Akebono manufactures a wide range of brake friction materials and foundation brake assemblies, including disc brake calipers and drum brakes. The company’s commitment to innovation, process improvement, quality control and customer service has positioned it as a key resource for leading OEMs, Tier I brake suppliers and the automotive aftermarket. For more information, visit www.akebonobrakes.com.

About Akebono Brake Industry Co., Ltd.
Akebono Brake Industry Co., Ltd. (TSE:7238), founded in 1929, is a world leader in advanced brake and friction material development and production. The Akebono Group operates R&D centers and manufacturing facilities worldwide, such as in Japan, the United States, Europe and Asia. Akebono has been supplying and jointly developing brake systems with the McLaren Formula 1 team since 2007. For more information, visit www.akebono-brake.com/english/index.html. 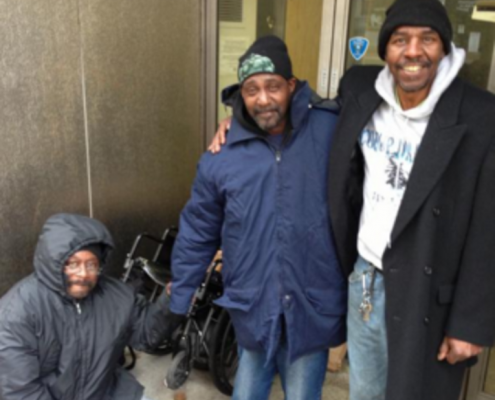 Another political cycle is gearing up and once again the candidates are eager to offer solutions to society’s most vexing and elusive issues. And once again, we hear barely a peep about one issue that continues to plague every state in the country: Homelessness.

The homeless population in America is now at about 600,000, roughly the number of U.S. cancer deaths last year.  Every major city in America faces the problem. In many cities, the issue has exploded into a full-blown crisis, with tens of thousands of homeless people literally ‘unsheltered’, living on sidewalks, parks, abandoned buildings or anywhere else. There are now ‘tent cities’ in many cities, which are really just mass gatherings of lost people sleeping in makeshift shelters. It’s impossible to view these scenes and not realize that something is very, very wrong here.

Candidates are barely saying word about it.

On the upside, this past year, there has been a step up in new, aggressive and often creative strategies to combat homelessness. New York City, with a staggering 60,000 homeless population, is proposing a bill to make it the first in the nation to guarantee representation for tenants facing evictions.

Its proponents argue that the measure would save the city money in the long run, as the costs of an attorney in an eviction proceeding are approximately $2,500 compared to the roughly $50K to shelter a homeless family. Hawaii, facing a surge in its homeless population, just recently declared a “state of emergency”, a proclamation that would allow the state to spend over $1.3 million to fund temporary shelters and transitional housing facilities. Last month, the city of Los Angeles, facing a 12% increase in its homeless population in the past year, also declared a “state of emergency”, calling for $100M to find solutions.

In Michigan, our numbers are especially daunting – about 100,000 homeless people, roughly half of whom are mentally ill, 30% are “unsheltered”, 17% are veterans, 69% are single mothers with children and the average age of a homeless child is 7.

Michigan now has the highest homeless rate in the Midwest and the 5th in the U.S.

This year has signaled a number of proactive efforts in Detroit combat homelessness.  Mayor Mike Duggan has directed the Housing and Revitalization Department to organize its “Housing First” program which brings together a coalition of aid organizations to locate housing solutions as a top priority, while also addressing the essential support services needed.  The approach is very ‘back to basics’: the solution to homelessness, the simple logic goes, is housing.

At the Detroit City Council, Councilwoman Mary Sheffield has been a beacon of leadership for the homeless, forming the Detroit Task Force on Homelessness, which has had a busy year working with private and government agencies to find safe and stable housing for the homeless.  Councilwoman Sheffield was instrumental in assuring that housing was secured last winter when the residents of Detroit’s ‘Tent City’ were forced to relocate, and she has demonstrated her continued commitment (without seeking publicity) by returning to the area and staying active to get more people off the streets.

Among the state legislature, perhaps the principal champion for the homeless is state Senator Bert Johnson.  Aside from his hands-on efforts at interviewing homeless people, Senator Johnson has formed his own Task Force comprised mostly of homeless activist groups, with the express purpose of drafting a ‘Homeless Bill of Rights’, a concept which four states have already codified into law.

The Homeless Bill of Rights (already drafted in preliminary stage) seeks to assure homeless people the express right against discrimination based on housing status.  National organizations advocating the adoption of a Homeless Bill of Rights have conducted extensive interviews with literally thousands of homeless people and have detailed a regular practice of harassment and discrimination.

A Homeless Bill of Rights would, among other things, offer legal protection for people to seek medical treatment or move freely or seek a job with facing discrimination strictly because of their housing status. Homeless advocate groups regularly hear reports of Michigan’s homeless population facing de-humanizing treatment just because they’re homeless, where it’s beaten, spat upon, arrested, physically displaced and verbally harassed.

Later this month, the week before Thanksgiving, is the annual ‘Hunger and Homeless Awareness Week’, an annual event sponsored by the National Coalition for the Homeless.   It’s an opportunity to spread awareness of hunger and homelessness in America, as well as to promote future involvement. The Coalition’s message is that ending homelessness is not impossible as long as the public doesn’t see it as someone else’s problem.

To most of us, the holidays are a time of over-eating and excessive consumerism. But to the hungry and homeless, the holidays are just a brutal reminder that they are literally and figuratively left out in the cold. Please consider supporting an organization that helps lift up the most vulnerable among us this coming season.

Mark Jacobs, an attorney and longtime community activist, is involved in nonprofit work and is chairman of Heart 2 Hart Detroit, a nonprofit organization committed to feeding and clothing Detroit’s homeless population.